FURNITURE FOR A LIFETIME

Home / FURNITURE FOR A LIFETIME

In the middle of the 19th century, at the time of the reappearance of interest in painted furniture the joiner guild of Debrecen had already ceased to show concern about traditional furniture painting, it aimed at satisfying the bourgeois taste, thus folk traditions of furniture making lived on in smaller joiner workshops of the country, among others in Hajdúböszörmény. Painted furniture making flourished in the town in the second half of the 19th century. Painted furniture fabricated here accompanied our ancestors, being present at all the major stages of their lives (from birth, through christening and wedding to death), they were organic parts of their everyday life. On the display stand we can see a man and a woman figure, “the newly wedded” represent one of the major stages of life, while the “godmother”, the woman figure holding a baby in her hands, stands for the birth and the christening. 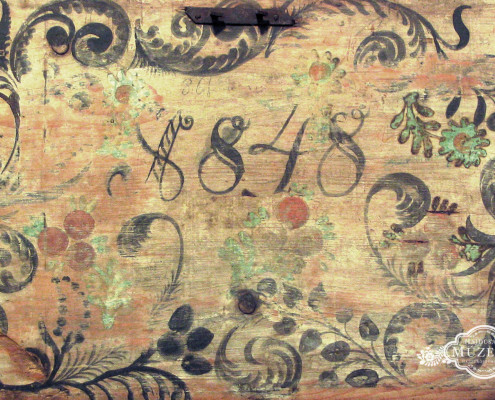