At the beginning of the 18th century craftsmen in Hajdúböszörmény began to organize craft-unions, guilds. The first guilds were established following the pattern of those of the towns of Upper-Hungary (Kassa, Bártfa) having a valuable tradition of craftsmanship. Charters of Incorporations regulating the internal life of the guilds and providing them with privileges were drawn up (1713 tailor guild, 1713 boot-maker guild). From the middle of the 18th century guilds were founded also in Hajdúböszörmény according to nationally unified guild regulations :

Material remains of the guilds are represented by simply decorated signboards as well as by guild chests and guild vessels.

Craftsmen working in the branches producing primarily to fulfil local, town-level needs and demands were not numerous, they constituted the so called “associated guilds”. After 1872, according to the law abolishing the guild-system, the craft-unions were turned into industrial associations then to industrial boards. 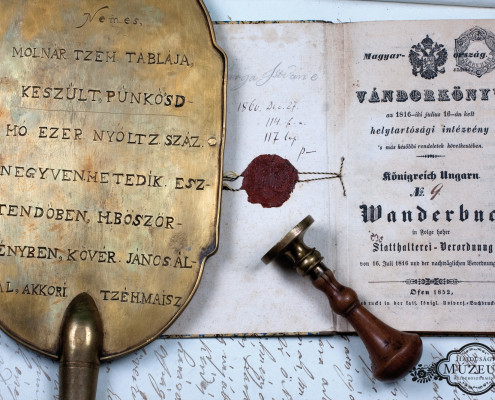