Coffins with colourful flower-patterned paintings became widely known all over the country from the middle of the 19th century. These coffins were fabricated in joiner workshops applying the techniques and motifs known from the contemporary furniture at the time when painted furniture making was flourishing. Apparently in all of the most important furniture painting centres (Komárom, Hódmezővásárhely, Kalotaszeg) coloured, painted coffins were made as well, but relics of these hardly survived. As a result of the favourable soil conditions and of the “padmalyos” burial method (at the leg-side of the grave there was an excavation containing the whole coffin and it was also closed by a wooden door) a great number of undamaged painted coffins were found in the Western Cemetery of Hajdúböszörmény at the end of the 1960s. Painted coffins of Hajdúböszörmény date back to 1850-80, a considerable part of which is probably made by Zsuzsanna Csiha furniture painter woman. Usually children or boys and girls deceased at a younger age were buried in these painted coffins. In the home of the deceased mirrors were covered with a black sheet, clocks were stopped as a sign of mourning. Beside the painted coffins and the carved grave headboards other relics of the burial cult are displayed in the side-showcase: obituary notices, images of the deceased from the beginning of the 20th century that reflect a more bourgeois-like taste. 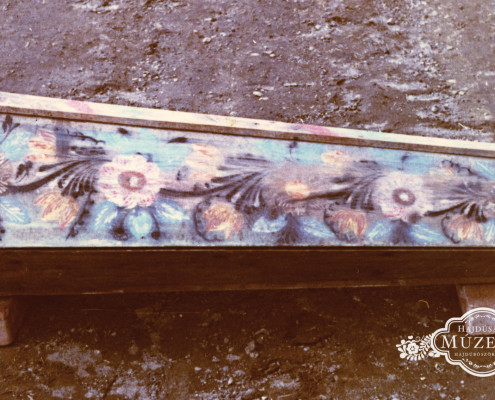