Home / The treasure of Böszörmény

A find of European reputation

The name of Hajdúböszörmény has been depicted on the archaeological map of Europe as an outstanding find spot since the middle of the 19th century, due to a treasure hoard of unparalleled richness found in the boundaries of the town in 1858. Because of its unique composition, the hoard, containing swords, helmets and ornamented bronze vessels unearthed near Csege-halom, soon became part of the scientific discourse and was chosen as denominator of an archaeological find group, a so called ”hoard horizon”, which comprised hundreds of treasures in different parts of Europe from the same period as the ”Böszörmény hoard”. That is why this exclusive treasure and the name of Hajdúböszörmény is familiar to every archaeologist specialized in the Bronze Age, from the Atlantic Ocean to the Black Sea.

In 2014, on the 90th anniversary of the establishment, Hajdúsági Museum managed to present the treasure of Böszörmény in the town from which it originated, and it was an achievement of historical significance. Another remarkable feature of the exhibition was the fact that all the items belonging to the find group, and being part of different public collections, were exhibited. The treasure hoard could never be seen in this composition in the country and though the idea of organizing an exhibition for the treasure of Böszörmény had been on the local people’s mind since 1910, they failed to realize it. Déri Museum also had plans about the presentation of the world-famous treasure of Böszörmény already on the occasion of the opening ceremony of the museum, in order to lay the grounds to a successful set-out. They started negotiations with the Hungarian National Museum and the Reformed College of Debrecen, but they failed to organize the exhibition. In the 1930s, Déri Museum could borrow three bronze swords in all from the Reformed College for a short temporary exhibition. More than 150 years passed until the famous treasure was gathered to be displayed in Hajdúböszörmény, at last.

Archaeological research define treasure hoard as a find group consisting of mainly metalware, which, regardless of its composition, belongs together in a sense that the items were buried simultaneously in consequence of a particular event. Bronze hoards can be composed of artefacts of everyday use, jewellery, weapons, metal vessels or casting waste. The constituents of the treasure are classified according to the characteristic features of their shape and design. Frequent recurrence of artefacts of the same type provides the possibility to identify hoard horizons, i.e. find groups belonging to the same period. The past 100 years of archaeological research attempted to find different explanations of the circumstances connected to the deposition of these treasures. The most common motifs are votive offering, storage or the salvage of valuables in times of war.

According to the present knowledge, the observable regularities in the composition and the find context of the treasures indicate that these hoards were buried for sacrificial purposes in ritual offerings. The purposed positioning, the attentive assortment and ”selective” feature of the find objects suggest that they were parts of a votive hoard deposited for sacrificial purposes.

Several treasure hoards from the Late Bronze Age were unearthed all across Europe, from the United Kingdom to Germany, from Scandinavia to Bulgaria. Within this diverse find material, the treasure of Böszörmény stand in a prominent position concerning the unusual richness of the hoard and the ornamentation of the objects.

About the circumstances of the discovery

One of the most mysterious and peculiarly-composed treasure hoards of the Late Bronze Age was discovered in 1858 by two day-labourers from Hajdúböszörmény, while hoeing on the maize field of Pál Eszterházy in Hajdúszentgyörgy.

Based on the observations of the discoverers, József Hampel described the positioning of the objects of the treasure: ”… two peasants, residents of Hajdúböszörmény, … were about to dig a fireplace in the ground. Right at the beginning, the knife was obstructed by some hard object – it was a bronze helmet. Continuing his work, the peasant found another one soon, along with six large bronze vessels next to them, and somewhat deeper he also discovered– according to his statement – approximately thirty bronze swords, lined up in the utmost order, next to each other, in a way that the points of them were directed in one way, the following in the opposite”.

The first description of the objects belonging to the treasure was made and published by Manó Graffenried, antiquarian from Vienna, who, after the discovery, purchased several swords from the Reformed Parish of Hajdúböszörmény. He wrote that he, himself, saw twenty swords and also mentions four vessel handles.

Unfortunately, we cannot make sure how many items exactly the treasure originally consisted of. At the moment the collections of the Hungarian National Museum and the Reformed College of Debrecen contain the following … items in total: helmets, swords, bronze cauldrons, bronze kettles, bronze cups.

About the motifs of the burial of the treasure of Hajdúböszörmény

Based on the existing records, it seems probable that the objects were deposited in the ground in a determined order, in a regular way following strict rituals. These proposedly concealed bronze finds could be votive gifts, sacrificial offerings dedicated to supernatural forces or deities similar to the gods of Egypt or of the world of the Middle East.

Grounded on the known items, we can claim that the treasure hoard contained every object type that counted as marks of prestige or rank in the Late Bronze Age. Among them, we can find defensive and offensive weapons, as well as, pieces of a rich tableware set for feasts. From the richness of the treasure one can conclude that the objects could possibly belong to a person or a community fulfilling a crucial role in the life of the region. By the generosity of the deposition, the person or the community effectuating the votive offering probably also intended to accentuate their own authority, economic power towards their subjects or allies

In the neighbouring territories of the find site, there supposed to be a centre of authorities, which managed and organized the everyday life of the region. This centre operated probably in the territories and neighbouring lands of the hillfort of Zelemér. This hillfort is located 2000 metre east from Csege-halom (a mound), along the former banks of Tócó Brook, at the bifurcation point of the Mély-völgy brook and the Tócó Brook. The ancient fortification was set up in a well-difensible area. The ditches were built in a way to benefit from the natural formations. The hillfort was surrounded by the valley of the brook from the north and the east, only the western ditch faced the open field. As a consequence, the ditch is supposed to have been the highest at that part. The ditches of the triangle-shaped hillfort delimits an area of 6.5 hectares. In the outskirts of the hillfort, extended Bronze Age settlements were located, which served and supplied those living within the hillfort.

The peculiarity of the treasure of Hajdúböszörmény lies not only in the richness of the objects and the motifs of deposition, but also in its location. The treasure hoard was deposed far from the residence of the Bronze Age community, on a territory and environment, which was of a particular interest for them from some point of view. This significance now cannot be traced back, we can only presume that an old oak tree could stand in that place, the graceful shape thereof provoked their respect towards it, or that a lightning hit that place, or perhaps it was the site of a victorious battle against their enemies. Csege-halom is located near the deposition site of the treasure, the exact origins thereof they are not supposed to have known, but the regular shape of the mound could attract their attention. They might have considered it as the guardian of ancient secrets, so it cannot be by chance that they entrusted it with guarding their own treasures, as well. 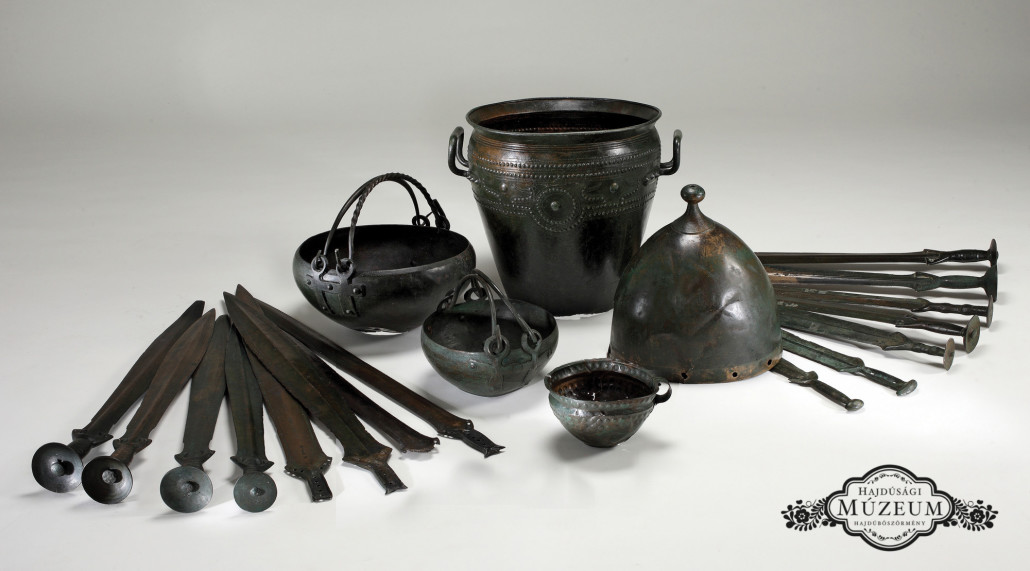