The emerging development of the middle-class after 1867 has determined the characteristic features of Hajdúböszörmény with an impact still visible today. Political life was characterized by going into opposition, celebrating the achievements of ’48, the actual realization of which was the cult of Kossuth. Hajdúböszörmény elected Lajos Kossuth freeman of the town, on his funeral ceremony a delegation represented the town. The governmental elections were repeatedly being won by representatives of the opposition. Among them the most remarkable person was Dr. János Benedek who was close to the political line of Justh. An outstanding item of the exhibition is a fragment of the canvassing flag on which the name of János Benedek is inscribed. Regardless of this the given period in Hajdúböszörmény is impregnated by the atmosphere of the Austro-Hungarian Monarchy. The most beautiful piece of the room is a painting of Franz Joseph which once decorated the wall of the Town Hall of Hajdúböszörmény, which has been displayed now for the first time after many vicissitudes. The undisturbed development following the Compromise was destroyed by the tragedy of World War I. The male population of the town were sent on military service mainly to the Russian (Galicia) and Italian fronts, they served in the Infantry Regiment no. 3, and the Territorial Infantry Regiment no. 39. The number of victims, not much less than one thousand, proves that the population of the town suffered relatively more casualties than the population of the country and the former empire in average. The collapse of 1918 was followed by a revolution and the dictatorship of the communists. Within a short time Hajdúböszörmény was under Romanian occupation, without any certainty how long it would last. This tragic period of history is represented by posters and other contemporary documents. The Romanian army left the town only in the spring of 1920. 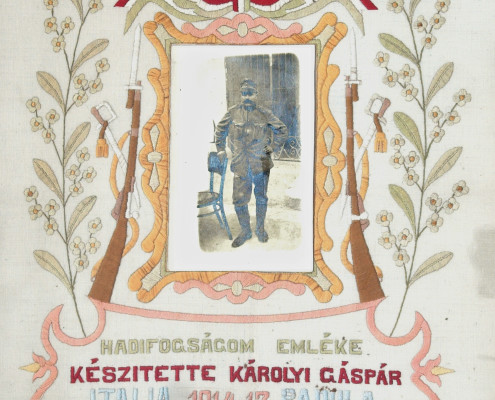