During the above mentioned period as an indispensable condition of the development of the middle class, civil society strengthened. Various kinds of associations, reading clubs, casinos were formed in different classes of the society, but naturally in a larger number among the agrarian population and the craftsmen. The Agrarian Youth Association, the flag of which is displayed in the exhibition, is a good example of the presence of self-organization in the peasant population. The craftsmen’s class had an important role in the town’s social life as opposed to their being relatively smaller in number than other classes. They founded Gábor Fazekas Craftsmen’s Reading Club that also had a choral group “Törekvés Dalkör” having success in national competitions between the two world wars. The exhibition presents many of the cups and other souvenirs gained. The most spectacular piece is the flag of the “Törekvés Dalkör”, with rich embroidery on both sides. Visitors can see wreath ribbons from the inauguration of the War Memorial dedicated to the victims of World War I, among others the ribbon of Miklós Horthy from 1927.

Journals constituted an important part of the town’s social life. The first local newspaper was published in 1883 edited by teachers, instructors, lawyers, priests (among the most outstanding editors: Sándor Dobó, Gyula Porcsalmi, Dr. István Molnár). These weekly papers had a considerable effect on the forming of public opinion. Even a printing house was run in our town from the end of the century, it took on the printing of smaller leaflets and books as well, apart from the journals. This printing house was started as a private enterprise, between the two world wars it became a corporation. The building of the renown Grammar School was finished in 1864, incarnating the ethos of the local intellectuals. 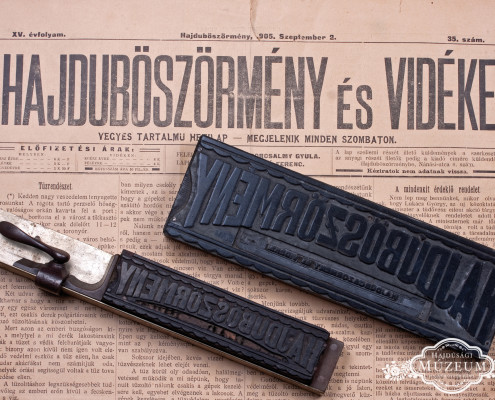